Amy at No Story Too Small has challenged bloggers to post on 52 ancestors in 52 weeks.  I am hoping to post each Sunday.  I am going to use my pedigree chart starting with my great grandparents and go in order.  This might get a little hairy later on, but at least it will give me some things to research/write research plans for and will help with filling out my chart for 2014.

Pedigree #9, Ancestor 2/52: Stanislawa "Stella" Frances Karpinski Acquard, the wife of ancestor #1, Florian Dana Acquard.  Stella is my great grandmother and one of 2 great grandparents I met, though I unfortunately do not remember her (she died shortly after I turned 5).

Stella was born 6 May 1914 in Buffalo, Erie, NY to Franciszek “Francis” and Jozefa “Josephine” (Szydlik) Karpinski.  She was the fifth of 6 children.

She married Florian Dana Acquard on 28 December 1932 in Bennington Center, Wyoming, NY.  They had 6 children, including my grandfather, Theodore.  When her husband died in 1948, she married his brother, Walter John Acquard.  They did not have any children.

A few personal things about Stella are that she knitted my christening outfit, which my sister and some cousins also wore.  We took many photos of my son in the outfit as well.  After Stella had been widowed a second time, she moved into a home across the street from Attica Prison.  This always amazed me as a child, but my mother told me Stella said it was the safest place to be - after all, who would escape from the prison and go to the house directly across from it. 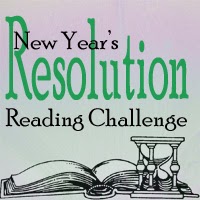 I joined Joy's Book Blog's New Year’s Resolution Reading Challenge, where you read 1-4 books relating to your New Year's resolution.  I chose books that focused on on my word of the year, savor, in a variety of ways.  Though I won't finish them by the end of January, I think having them to read throughout the year will be a good reminder of what I am  working on in 2014.

My books are as follows:

As I mentioned above, the read along book is The Happiness Project.  The first set of questions were to be discussed today.

1. The first question is borrowed from The Happiness Project Reading Guide at HarperCollins. Gretchen argues throughout The Happiness Project that striving to be happy is a worthy, not selfish, goal. Do you agree? Do you think that Gretchen was right, or not, to devote so much time and attention to her own happiness? Do you spend much time thinking about your happiness?
I think it is definitely a worthy project, so long as you do not do it to the detriment of others.  I think at time she went a bit too far, but overall I think it was a good plan.  I don't spend nearly that much time thinking about my happiness mainly because I don't have that much free time or a book contract to do so.
2. Of the three topics covered in the first three chapters (Vitality, Marriage, and Work), which area would you like to improve the most in 2014? Why? Would some of the techniques that worked for Gretchen work for your situation?
I think I would like to focus on my marriage most.  Not because it has problems, but rather because we're still learning how to focus on each other while being parents.  I think she has some great tips in here and in her second book.
3. What idea from the first three chapters of The Happiness Project could use today that would likely make you happier?
"If you do new things — visit a museum for the first time, learn a new game, travel to a new place, meet new people — you’re more apt to feel happy than people who stick to more familiar activities."

I'm all about seeing and learning new things and definitely find that I am happier when pushing out of my normal routine.
4. What idea from the first three chapters of The Happiness Project are you pretty sure wouldn’t make you happier at all, even if it seems to work for Gretchen?
She definitely has much more time to research and think about her happiness.  I, unfortunately, can't just spend hours a day reading, thinking. and writing on my happiness.
5. What do you think of the structures that Gretchen uses to facilitate her Happiness Project? Would something like a Resolutions Chart help you? What about the concept of tackling a different theme each month?
I think a resolutions chart may help, but that would require a level of organization that I don't currently have.  I very much like the idea of a different theme each month, though within the overall framework of my year, which I guess is what she is doing though on a broader scale.  For instance, for January I am focusing on organization and increasing my productivity (hence book 3 above) so that I can more easily savor what is occurring without feeling rushed or stressed.  I'm still figuring out the rest of the year.
at January 08, 2014 4 comments:

Amy at No Story Too Small has challenged bloggers to post on 52 ancestors in 52 weeks.  I am hoping to post each Sunday.  I am going to use my pedigree chart starting with my great grandparents and go in order.  This might get a little hairy later on, but at least it will give me some things to research/write research plans for and will help with filling out my chart from Saturday.

I guess it's good to jump right in with one that I need to work on.  I have not done much research on my father's side of the family because I have a great aunt and great uncle who have traced the family very far back.  I need to ask for scans of vital records and other sources they have as soon as possible.

Florian was born the 9 August 1899 in Bennington Center, Wyoming, New York, the 11th of Joseph and Mary (Kohley/Kollin) Acquard's 12 children.  He married Stella Karpinski on 16 December 1932 in Bennington Center and had 6 children, Theodore (my grandfather), Ronald, and one son and three daughters who are still living.

Florian died young, at age 49 on 28 December 1948 of a cerebral hemorrhage.  According to my great aunt Dottie, he died because "he fell from a wagon when the part holding horses to wagon broke.  He landed on his front part of head.  A week or two later he had a cerebral hemorrhage."  He was buried at Sacred Heart Catholic Church Cemetery, Bennington Center, Wyoming, NY.

My father has the middle name of Florian after him and my uncle looks very much like him.  It is nice that part of him has been carried on.

From Randy at Genea-Musings:
1)  Determine how complete your genealogy research is.  For background, read Crista Cowan's post Family History All Done? What’s Your Number? and Kris Stewart'sWhat Is Your Genealogy "Score?"  For comparison purposes, keep the list to 10 or 11 generations with you as the first person.
2)  Create a table similar to Crista's second table, and fill it in however you can (you could create an Ahnentafel (Ancestor Name) list and count the number in each generation, or use some other method).  Tell us how you calculated the numbers.
3)  Show us your table, and calculate your "Ancestral Score" - what is your percentage of known names to possible names (1,023 for 10 generations).
4)  For extra credit (or more SNGF), do more generations and add them to your chart.
5)  Post your table, and your "Ancestor Score," on your own blog, in a comment to this post, or in a Facebook Status post or Google+ Stream post.

It is time to write down my goals for the year and send them out into the universe.