For my first post on this year's Genealogical Research Institute of Pittsburgh (GRIP), go here.

Another full day of GRIP classes commenced today at 8:30 am, though really, some of my favorite parts of GRIP occur before this and around classes, when you can sit and talk to other attendees.  Having attended 2 other GRIP institutes and a few conferences, I now have people whom I recognize and know in addition to all of the wonderful people I get to meet.  If you are worried that you do not know anyone and that is why you do not want to attend, I can guarantee it isn't a problem.  Sit at any table in the cafeteria and you'll meet interesting people who are actually interested and understand your genealogical addiction.

Our first class today was the second part of Judy Russell's "Justice in the Empire State: Legal Records in NY State."  Having had an overview of the laws and courts yesterday, today we were shown actual records and how you can use them to create a better family history.  My favorite part of this session was her recommendation to go beyond the regular FAN club and find their enemies as well, as that makes for great court cases.

Then Karen Mauer Jones spoke on "The Dutch in New York."  Understanding the Dutch is key to seventeenth and eighteenth century NY research, particularly in the Hudson Valley region of the state.  An excellent starting point on this research is the New Netherland Institute.

After lunch Jane Wilcox presented on "New York City and State Governmental Vital Records and Alternatives."  Having begun my genealogical research in New York, I remember being in shock when I found out that people in many states can just walk into the court house and start flipping through books of vital records and that these vital records go a long way back.  NY records, particularly those outside of NYC, are not complete until the early 1900s and even then you have to check an index and order a copy while paying a large sum of money.  Using items such as state census', newspapers, and city directories can be key to tracing your family back in time.

Lastly, Karen spoke on "Joseph Johnson Chase: An Upstate New York Case Study."  I love hearing and reading case studies and this one was tremendously informative.  The main point of this one was that using cluster genealogy can help break through brick walls, particularly during the difficult time period of 1780 and 1850.  Looking for the women, in particular, is often difficult but also very rewarding.

I spent the time before dinner reading BCG portfolios, which are available at many conferences and institutes for those curious of the certification process.  At this point in my genealogical study, I find the resumes showing the education opportunities they took part of most useful.  The reports are very interesting and show me what to strive for in writing up my own research.

There was also an evening session today by Judy Russell.  In "How Old Did He Have to Be?" Judy demonstrated how knowledge of the law of a specific time and place could assist in getting a person's age range and in deciding which John Smith was yours.  Although it cannot give you an exact birth date, having even a small range is better than nothing.  I cannot recommend her lectures enough and if you are in NY, she is speaking at the New York State Family History Conference in Syracuse in September.

Tomorrow's classes include land records, urban research, and workarounds to record shortages.
at June 30, 2015 No comments:


My third time at the Genealogical Research Institute of Pittsburgh (GRIP) began yesterday afternoon after arriving at La Roche College in Pittsburgh.  I attended the first year, 2012, and last year, 2014, and it is something I look forward to all year.

Every year we get a little present and this years was a USB drive attached to a name tag, which will be very useful to bring on research trips to keep that plus my ID and credit card together.

This year I am in the "Researching New York State" track coordinated by Karen Mauer Jones.  As soon as I saw that being offered, I knew I had to take it.  All of my and my husband's lines end in New York State and while I can tell anyone how to research in Buffalo, but once I get into rural Central and Northern NY, records are much harder to come by.

Our days are broken into 4 classes plus an optional nightly lecture that is open to the public.  My classes today were Researching New York: Introduction and Historical Overview with Karen, The New York Gateway: Immigration and Migration by Jane E. Wilcox, Justice in the Empire State: Legal Records in New York, part 1, by Judy G. Russell, and New York's Military Records once again with Karen.

The biggest lesson learned today is that New York is a black pit of confusing and oddly named records and places.  I have friends who moved to Syracuse from Maine for school and over the past few years I remember them being tremendously confused by the idea of a town in NY and my husband explaining it while I zoned out.  Today I learned that what is known as a town in NY is comparable to a township in other places, a fact that confuses researches not from the state.  I had always known to check both town and county records (vital records are almost always cheaper at the town level), but apparently one wouldn't do that in other states.

One of the speakers I had most looked forward to hearing was Judy Russell, and she did not disappoint.  I do not even know where to begin with all of the wonderful things she told us except to say that if you have NY ancestors, you need to look at Duly & Constantly Kept for a primer in legal records.

Lastly, I highly recommend the New York Family History Research Guide and Gazetteer: First Edition put out earlier this year by the NYG&B.  I bought a copy shortly after it came and out and have been amazed by the information in it.  It is well worth every cent.

Following dinner Jane E. Wilcox spoke on "Finding American Women's Voices through the Centuries: Letters, Journals, Newspapers, and Court Records."  I found it interesting that she recommended Presidential Libraries as possible sources for letters, which is not something I had heard of previously.

Tomorrow is another full day of classes including part 2 of legal records, state vital records and alternatives, and a case study about a man from upstate NY.  If you're in the area, Judy Russell will be giving the evening lecture entitled "How Old Did He Have to Be?" which is sure to be fantastic.
at June 29, 2015 No comments:

"No union is more profound than marriage, for it embodies the highest ideals of love, fidelity, devotion, sacrifice, and family. In forming a marital union, two people become something greater than once they were. As some of the petitioners in these cases demonstrate, marriage embodies a love that may endure even past death. It would misunderstand these men and women to say they disrespect the idea of marriage. Their plea is that they do respect it, respect it so deeply that they seek to find its fulfillment for themselves. Their hope is not to be condemned to live in loneliness, excluded from one of civilization’s oldest institutions. They ask for equal dignity in the eyes of the law. The Constitution grants them that right. The judgment of the Court of Appeals for the Sixth Circuit is reversed.
It is so ordered."

And for the genealogy blog related part...  Genealogy companies, time to let us put same-sex couples into our family tree programs correctly.  Legacy has a workaround for this and I have heard some programs allow it completely, but it needs to be all of them.
at June 26, 2015 No comments:

Email ThisBlogThis!Share to TwitterShare to FacebookShare to Pinterest
Labels: History 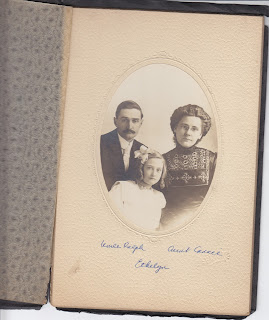 Ralph, Carrie (Gress) and Ethelyn Williams.  Buffalo, Erie, NY.  Around the turn of the last century (1900).  According to Legacy, Carrie is my 2nd great grand aunt and Ethelyn is my first cousin, three times removed.

Formerly in possession of my great aunt Lois.
at June 10, 2015 No comments:

Lois, Janice, and Barbara Whitehead, 1930, most likely in Buffalo, NY.  My maternal grandmother's older sisters.  Photo in possession of my great aunt Barbara.

In addition to #blogjune, I'm also taking part in zen habits 30-Day Learning Challenge which is taking one topic and studying it for at least 10 minutes per day, every day of the month.  The topic I have decided to look at in German Genealogy.  I will be reading and studying the following:

My goal in studying this information is to make progress on my Gress, Fink, Strassheim, and Passel ancestry.
at June 02, 2015 No comments:

Email ThisBlogThis!Share to TwitterShare to FacebookShare to Pinterest
Labels: #blogJune

It's #blogjune again!  I tried this last year and kind of failed, so I'm trying again.  You can sign up here.

1. A reminder to actually post on here.
2. #blogjune is full of Australian library bloggers, who write interesting things that I don't know much about.
3. Having a record of all of the interesting things going on in my genealogy/library/travel/etc. life.
4. Actually working on my genealogy more so that I have something to blog about.
5. Developing the blogging habit again.
at June 01, 2015 No comments: