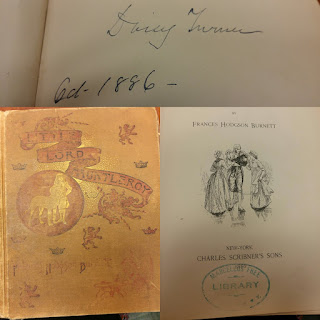 As you may know, I work in a small public library in Central New York.  One of the books donated for the book sale was an old library book that had been withdrawn at some point and sold.  Little Lore Fauntleroy was written in 1886 by Frances Hodgson Burnett.  It was stamped and marked as book number 7010.  More interesting was that it was signed "Daisy Turner" with the date "Oct- 1886-".

Thanks to some research by one of my amazing pages, we think it was placed into the library in the 1930s.  Because I had some time while sitting at the circulation desk, I thought I would try to find out who Daisy was and why she donated this book to the library.

Thanks to Ancestry.com Library Edition and Newspaper Archive.com (also available through the library), I learned that Daisy Muriel Turner was born 10 Mar 1874 in Chicago and moved to Skaneateles in 1900 with her mother Helen (Wheaton) Turner after her father William died. She died in 1968 and is buried in Lakeview Cemetery in Skaneateles. It looks like Helen was born in Pompey and then lived in Syracuse prior to marriage.

I have no idea why it was donated it here, since Skaneateles did have a library at the time, however I'm glad she did and that I got to play detective.
at June 24, 2016 No comments: